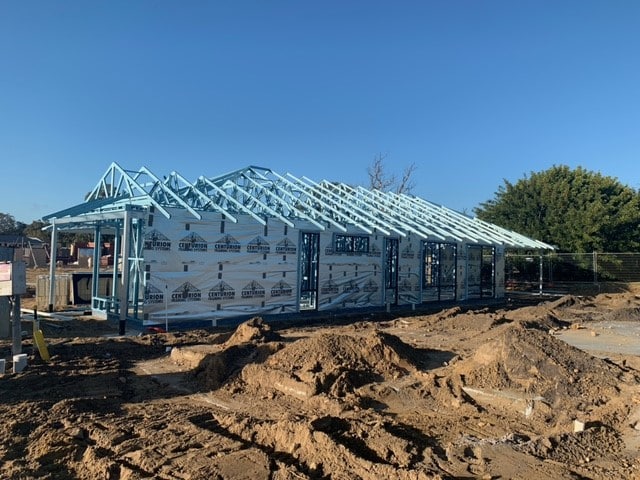 As Perth builders grapple with the looming problem of reduced trades and increased demand, one major Perth builder is getting on the front foot.

Under construction in the southern Perth suburbs, this builder has their first all-steel frame display home underway and a second to soon follow on the northside.

Centurion Framing Systems (CFS) have just completed the design, manufacture, and installation of the base structure of this exciting new home using Truecore steel and the Endurocad framing system.

CFS Managing Director: Steve Canning said “Many builders are moving their attention to steel framing given there is a major crisis heading the industries way. With really strong sales and many trades such as Bricklayers, Plasterers, and timber roof carpenters, having left the game during the downturn of the past 6 years, you don’t have to do the math too hard to see there is a real problem heading the housing sectors way.

At CFS we are fielding enquiries daily from concerned builders and it’s fantastic to see an innovative major builder getting on the front foot and getting their display home underway in a construction that addresses the concerns of a lack of brickies and plasterers”.

So why build in steel?

We will keep you updated on this and other developments as more and more builders look to come on board.

If you are a builder and we can help you overcome any of these problems that might be heading your way then please reach out to the friendly CFS team, we would be glad to discuss the opportunities with you.